“Now there is only blood and murder.” – the poignant words delicately spoken by Mohammad in Syria as he recalls his memories before the troubles of Syria. “My days were so beautiful with my friends, studying and working, we laughed so much.” ; reminiscing yet unable to evoke a smile with such thoughts.

Mohammad had joined the revolution from the beginning and has battled in some of the fiercest battles in the country. He also helps at a police station trying to bring order and a policing system to be respected by all in the region; a gruelling task amidst the chaos of the country. 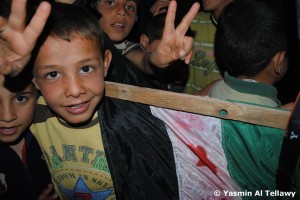 A different energy; a protest in early 2012 in Syria.

I first met Mohammad over 2 years ago, and have watched the deterioration to his personality and mind frame. A young man in his early 20’s with boyish charms, full of energy, laughter, and joking often; he now carries a colossal weight of overwhelming emotions he can only hold internally. His smile forgotten and health taking a rapid deterioration with a diet of cigarettes and coffee in excess with little else; like many of the men in Syria now.

As the crisis in Syria rages on, the focus is all too often on the horrors of the war lacking anything in-depth on the emotions being suffered within the people of Syria living through this nightmare. Young men like Mohammad seem forgotten in all of this, and are only allowed to be strong men, fighters, warriors of their country; they suffer through torture, violence, scenes of devastation more than anyone in Syria, at times they are subject to sexual violence within their torture suffering severe humiliation, when they are not in suffering they have an abundance of pressures placed upon their shoulders; caring for their family, providing food for them, shelter for them, being the figure of strength is all that is expected of them with the cultural pressures, only now there is the added pressure of the most devastating crisis in our world.

Countless people have lost their lives in this war in Syria. Countless men have lost their lives fighting for their country in what was a revolution that began over 3 years ago. A branding of ‘Jihadi’ as an umbrella term is the perception they know is given to them forbidden to hold any emotion. These same men who first picked up arms done it to defend their area, to protect their family, yet the progression of this crisis in Syria has escalated past anything they imagined changing their lives into a never-ending horror story; that is for the few who are left from the beginning in 2011.

It is no longer a battle against a regime for them, it is also a battle against an ever-increasing list of armed groups, extremists and their fellow country men who even once fought by their side. Battles they never envisioned with the unity that was once so strong against the regime in the beginning. Many have lost their lives, left the country to try to have a life seeing no future in Syria for now, or turned to extremist groups.

These men once had lives the that echo globally; nights with friends full of laughter & memories to be recounted again and again, tales of love; flirting with girls in university, exchanging love notes with girlfriends in private, dancing through the night at their friends weddings, celebrating their holy holidays with grand family gathers, and all the typical things that young men do in their life across the globe. Many would have no clue of how to use a gun, let alone be able to name the many kinds of weapons as they do now in Syria. While these are all relatively simple things I speak off in day-to-day life, these also have serious repercussions on the mental state of these men with all the pressures they face today.

It is not uncommon now for many to wish for death to come knocking on their door now with different reasons; naturally the extremists are often speaking of death to come their way, as do all fighters as a general in the culture being ready to die proudly for the fight they choose, I am sure terms such as ‘Allahu Akbar’ with videos of beheadings will sadly come to the minds of people who may read this uneducated in the culture to understand my point in what I am trying to convey. There is however a much more serious reason and that is from PTSD, depression, exhaustion and all the stress that they have to endure, stresses that have also been the product of some suicides in men from Syria, with suicide being something far from common in the culture.

The extreme exhaustion of the tragedy they are witnessing daily is simply too much for them, sleepless years have now gone by, never-ending trauma in their beloved country, and those far distant memories of the joyous life they can just about recount now are all simply too much to bear.

Through all of this Mohammad holds a kindness in his heart, an innocence and a deep care for the people in his country. He has not turned to corruption or any criminal activities. He asks me to please see a family he knows who really have nothing and shares just how awful it is for them as there is no man left in the family and they struggle too much, “Is there a way to help them?” he pleads to me.

Mohammad is a young man suffering terribly through this. Determined to help his country, yet at a loss now on what the future shall be, far too grown beyond his age with pains that will never leave him, knowing that his future is in turmoil whether the fighting ends tomorrow or not.

If friends have not been killed, they have left, changed to extremist thinking breaking bonds that once existed, some friendships unravelled earlier in the revolution with the pressures of choosing legions to the regime or a free Syria.

Another day, another death. His close friend of many years, from before the revolution has been killed.

“I just wish to die to not feel anymore pain.” expressed in a state of sheer exhaustion as Mohammad leaves to his friends burial.

(Real name has been changed to be Mohammad in this blog)